Lifting of the Corporate Veil

According to the Companies Act of 2013, at the time of its incorporation itself the company is considered as a separate legal entity different from its promoters, directors, members, and employees. As per the law, the company is an artificial person created by law and hence can enter into contracts and also can sue and be sued by others. Even if the promoter, directors or shareholders are the beneficial owners of the company, the company alone is the beneficiary of its gains and in the same way is liable for the debts incurred. 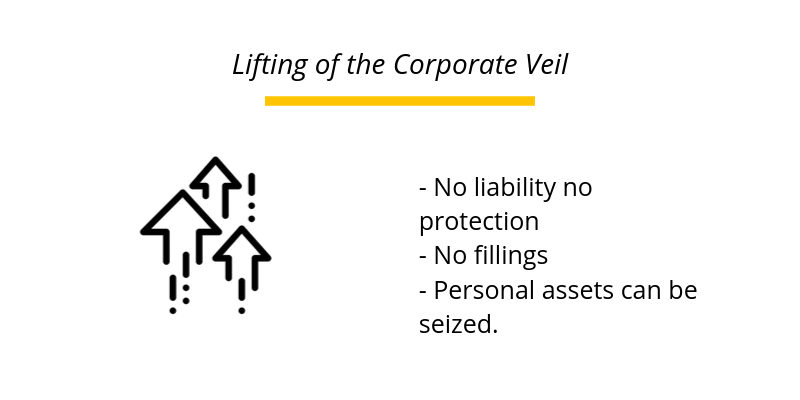 Nonetheless, in certain circumstances, so as to protect the interest of the creditors, the concept of ‘Lifting the Corporate Veil’ was developed, in which the shareholders of the company is liable for its obligation.

Misuse of the provision

Before the enactment of Companies Act, the investor’s interest was not protected. At that time, the common practice for establishing a business entity was in the form of partnership or sole proprietorship.

As in the case, the deeds of one partner made the other liable or the liabilities of the firm were attached to the individual assets of the partners or proprietor. Eventually, this risk factor has affected the economic growth as people are reluctant to invest in business.

The introduction of Separate Legal Entity and Limited Liability has made remarkable impact in the economic growth of the nation. Being an entity different from its shareholder and their liability is limited to their contribution in the shares of the company, more and more investors got devoted in new ventures.

As the code “Doctrine of Corporate Entity” protects the investors or shareholders with limited liability feature, whereas it puts the interests of the creditors in risk since the recovery of the default debts can only be made from the assets of the company.

Generally, the law also mulls over the fundamentals of incorporation only and hesitate to breach the separate legal entity feature of a company even if it is found that the company was misused to meet the selfish interests of its promoters.

As observed in many cases, the directors of the company use the principle of corporate personality of the company to shield their fraudulent activities with the intention of deceiving others.

Increasing number of such cases envisaged the requirement of repairing the provisions in law to evade mishandling of such advantage. Hence, in certain circumstances, the court has the full power to identify the company with its promoters or member. In other words, if the circumstances demand, the court can overlook the separate legal entity nature of a company and enact the members personally liable for the activities of the company. This is known as ‘Lifting of the Corporate Veil’.

The Corporate Veil of a company can be lifted in certain circumstances only. Generally, the court doesn’t want to break through the basis of incorporation law whereby the company is distinct from its promoters/shareholders.

The recent India has observed the Corporate Veil lifting by the Debt Recovery Tribunal when a consortium of bankers has urged for piercing the protection for Vijay Mallya assets in Kingfisher Finvest’s Insolvency.

Circumstances in which court can lift the veil

To balance the economic rhythm in the country and to ensure growth, the law protects the interest of the creditors also.

Recently, the government has consolidated the laws related to restructuring and recovery of defaulted assets and introduced the new Insolvency and Bankruptcy Code of 2016 to enhance the confidence of the creditors. Also, the laws in India are flexible to lift the Corporate Veil in certain circumstances whereby separate legal entity cannot give any protection to the directors.

In the eyes of law, the company can be held liable for an act done in the name of the company and at the same time it formed for lawful purpose only. If a company is created for dishonest use, fraudulent purpose, unlawful purpose, evading taxes or any other purpose which is against the public interest than law can identify the persons who are behind it and are responsible for any fraud/unlawful act, then the court can disregard the corporate personality and look behind the real person who are in the control of the company.

In short, where any deliberate action of a company or by its promoters or investors in the intention to deceive resulting injustice to a party dealing with the company the law allows to disregard the separate legal entity principle.

The following are the grounds in which the corporate veil can be lifted:

Fraud: - The Corporate Entity of a company can be ignored by the court, if the promoters took advantage of the veil for fraudulent acts and to escape from legal obligations. The Court may also pierce the veil if it is fraudulently used to defeat the claims of the creditors. In such cases, the court may lift the veil and make the investors liable.

Agent: -  The corporate personality of the company  is sometimes misused as an agent or trustee of its members or of another company. In those circumstances, the courts have pierced the veil as such company is deemed to have lost its individuality and shall be identified with its members.

Tax Obligations: - In the circumstances when the corporate façade of the company has been used to for avoiding tax obligations, the corporate veil has been lifted to catch hold of the evaders. However, it is pertinent to note that the Courts can break through the corporate veil, only when the sole object of its formation is tax evasion.

Evasion of Welfare Legislation:- In order to escape from the liability under welfare legislation, the court may interfere and can pierce the veil

Sake of Existence: In certain cases the formation of a Company is just to take the advantage of the limited liability aspect, where the company is a cloak, the court may lift the veil.

Provisions in the Companies Act of 2016 itself lift the corporate veil of a company. Sections 7(7), 251(1) and 339 of the Companies Act dealt with such matters. In section 7(7), the Act talks about the punishment for incorporation of company by furnishing false information.

The statutory provisions in Companies Act to pierce the Corporate Veil and whereby the individual members/directors will be made liable for certain transactions; such circumstances are: