How to Close (Winding up) a Private Limited Company in India

Winding up of a company is a process through which the life of the company is concluded, and its property is realised for the benefit of its creditors and members. The entire process of winding up is administered by the liquidator. Private Limited Company can be closed in 3 ways. Selling of the Company, Voluntary Winding Up and Compulsory Winding up. 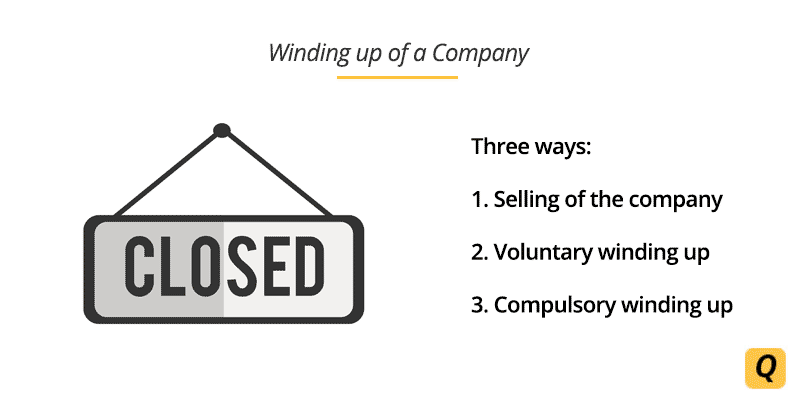 Shutting down a company is a long and complicated procedure. A private limited company can be closed down in various manners depending on the requirement of the owner.

A company can be sold by transferring the majority shares to the person best suited for the company. The procedure of eventually winds up the company, but only the majority of the shares are transferred with the responsibility of stocks.

Winding Up of Private Limited Company

Winding up of the private limited company is necessary in the case where the company needs to conclude its business or due to bankruptcy. The winding up method can be initiated intentionally by the shareholders or creditors, or it can also be done on the order of the tribunal (Compulsory Winding up ).

If the company is not dissolved and the assets are not collected as per the legal proceedings, the company is considered in operation, and hence the directors will be liable for completing all the compliances associated with the private limited company.

Note: Winding up on the ground of inability to pay debt must be filed with a significant amount of information about the resources of the company and its future liabilities.

Procedure to liquidate or wound up the private limited company can be done voluntarily, or the process can be initiated by debtors application to the court or in certain cases if the contractual obligation by the company has not been fulfilled.

This the first stage in the closing of a private limited company and this process first assets are realised so that liabilities are paid off and if any surplus is left in then it has to be distributed amongst the members of the private company.

Dissolution of the company is a way through which you can end the company as a separate entity. The process closes down the entire company down after realising all the assets and distributing surplus within the shareholders of a private limited company.

Note: Procedure of winding up a company is similar for every company Incorporated in India.

A private limited company can be wound up through 3 modes:

Procedure for Voluntary Winding Up

As per the Companies Act 2013, Any Company, who did any fraudulent act or unlawful act or even if they contributed some action in some fraudulent or illegal act then that company shall be Compulsorily wound up by the Tribunal.

Following is the procedure for compulsory Winding Up

Step - 1: Filing of the application

The following parties will file a petition

Step - 2: Petition shall be accompanied with Statement of Affairs

While filing the documents under Form 4. The Chartered Accountant should audit all the documents and Auditor should give an Unqualified opinion for the Financial Statement.

The Petition should be Advertised in a daily newspaper, and the language of the advertisement should be in English and Regional Languages in the area. The Advertisement must be carried out under Form 6

Step - 4:  Proceedings in the Tribunal

Form 11 will be required for the order of winding up the company, and the following prescribed duties need to be followed.

3. Winding up of a Company by the Tribunal

If the Company has no debt or Creditors