Can Names and Surnames be Registered as Trademark?

The law in India does not blatantly refuse the registration of a surname as a trademark under the Trademarks Act of 1999. It is a general understanding and presumption around the world that surnames and personal names can be registered. However, a name or a surname has to acquire distinctiveness before it can qualify as a trademark. 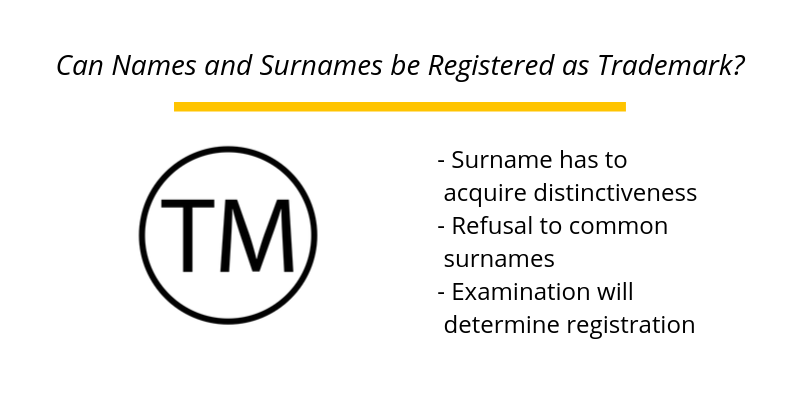 There exists a great deal of uncertainty with regard to the law on this. The reason for this is that ideally a trademark is supposed to be able to distinguish one set of goods from another, but due to the existence of common surnames and their usage in the market, there arises a great deal of confusion with regard to the identity and source of the product. For example, surnames like “Aggarwal” and “Sharma” are extremely common.

Thus, a surname must acquire distinctiveness in order to be able to distinguish itself. For surnames where there exists a “better meaning” attached to it besides it being a surname, there exists a much higher chance of it getting registered -This reasoning has been upheld by courts in India.

If proof of acquired distinctiveness is not shown then the surname is considered to be having only ordinary significance and in that case, registration will not be approved. In the Delhi High Court case of Pratibha Singh v. Singh and Associates of 2014, the court held that “Singh” is an extremely common surname in India because of which it cannot be trademarked with only a single person having a monopoly over it.

However, in the 2013 case of Dr. Reddy Laboratories v. Reddy Pharmaceuticals, despite the name “Reddy” being an extremely common surname in the South, the court highlighted on the fact that when average consumers think of “Dr. Reddy’s” they do relate it to the manufacturing of drugs and pharmaceuticals because of which it has gained immense reputation and goodwill which has not become its identity.

Thus, the surname has become well known over the past 19 years of its functioning. Thus, any other pharmaceutical company using the same name to sell its drugs would be using it in a dishonest manner to ride on the goodwill of the original company and the same would amount to infringement/passing off.

There are a number of such surnames that have acquired the status of “well-known” trademarks over the years. Some examples are- Tata, Philips, Mahindra and Mahindra etc.

This is important to note because when a surname even without registration becomes a well-known trademark over the years, even a person with the same name would not be permitted to use that mark.

However, based on the facts of the case, the court may look into it and suggest modifications so as to allow both to use the same mark without confusing the public.

Thus, if the general public identifies a surname as “primarily a surname” then registration will be denied. However, examination of the application would depend on other factors as well such as; how many people possess the same surname. If a surname is extremely unique and rare then it may not be required for them to show a secondary meaning to the name in order to attain registration.