Cybersquatting is the registration, use or sale of an illegal domain name. This domain name contains a trademark that the registrant/user does not have any rights to use. Further, it is illegal because the name is used with a bad intention of riding on the goodwill of the more established or well-known trademark. 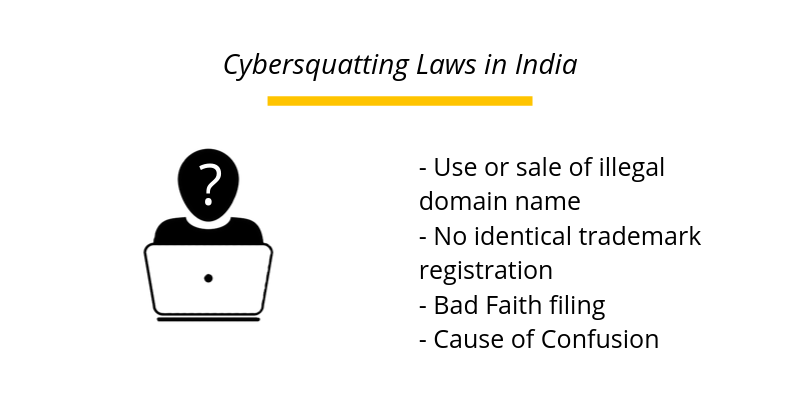 Cybersquatters aim at associating themselves with the well-known trademark in order to profit out of it.

The Delhi High Court in the case of Manish Vij v. Indra Chugh defined cybersquatting as “an act of obtaining fraudulent registration with an intent to sell the domain name to the lawful owner of the name at a premium”

What is a domain name?

Simply put, a domain name is used in order to identify IP addresses which maybe one in number or may extend to multiple. They are used in the URL to identify web pages. Eg; Microsoft.com represents a number of IP addresses.

However, they are certain domain names, which are known as Top Level Domain (TLD) because of there exist only a limited number of suffixes with each one representing a top-level domain.

Some familiar examples of these are; com- commercial businesses, gov-Government agencies, edu-educational institutes and org-organizations.

In India, cybersquatting cases are decided under the Trade Mark Act, 1999. There exists no Domain Name Protection Law nor are there any provisions pertaining to cybersquatting under the IT Act.

However, because of the absence of any proper laws or structure in place, the position in India has been developed through case laws. The first Indian case on this matter was the case of Yahoo Inc. v. Akash Arora it was held that the use of the domain name Yahoo India was deceptively similar to Yahoo Inc. which is likely to deceive the public.

It was held that the names and the services that they offer were similar and that Yahoo Inc. deserves protection because there exists a certain brand value and reputation that it has build over the years. The case of Tata Sons vs. Manu Kosuri also relied on the Yahoo case observing that an average internet user cannot possibly distinguish between domain names of the parties and hence a strict view must be taken when it comes to copying since the harm that is done may be far greater.

Domain names add value and are considered to be a corporate asset because of which they must be entitled to protection on the same footing as that of a trademark. Similarly, in the case of Dr. Reddy’s Laboratories Ltd. vs. Manu Kosuri it was held that domain names hold an important position in e-commerce.

The U.S. has specific laws when it comes to Cybersquatting i.e. the Anti-Cyber Squatting Consumer Protection Act (ACPA) of 1999 under which a victim has two remedies: 1. To sue as per the provisions of the ACPA or 2. Under the arbitration system that is created by ICANN (Internet Corporation of Assigned Names and Numbers)

Disputes that concern registrations made in bad faith are often brought under the Uniform Domain Name Dispute Resolution Policy (UDRP) that has been created by ICANN and under UDRP it is WIPO that is the dispute resolution mechanism that is the protector of Intellectual Property across jurisdictions.

This system is an online one for the sole purpose of administering commercial disputes. The Dispute resolution can be used to exchange documents as well as evidence online with the exception of original documentary evidence, which must be filed physically.

The only remedy that can be sought through this medium by a complainant is that of cancelling the registrant’s domain name or transferring of the domain name to the complainant.

A victim in India may also choose to bring forth arbitration proceedings under the above-mentioned rules. A case can duly be filed with .in registry. The National Internet Exchange of India would then bring the case to fast track dispute resolution wherein decisions are transferred in 30 days.