How Long Does a Copyright Last?

Once a Copyright has been registered, its validity depends on the type of the work. While the general rule is that a copyright lasts for 60 years after the death of the individual, various factors can change the overall term of the right. 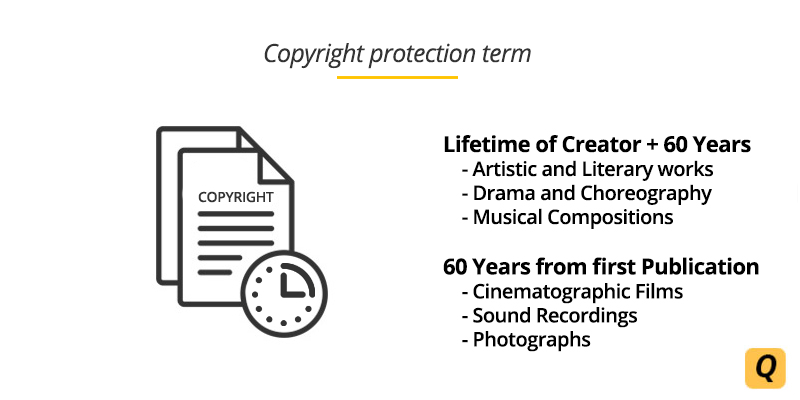 Copyright is a limited period right that is granted to the owner of a creative work. Once the period of the copyright eclipses, the work falls into the public domain, bringing an end to the rights of the owner.

Factors that Determine the Validity of the Copyright

The Term of the Copyright

During the period after the death of the author, the ownership of the work goes to the legal heirs.

For Example, The copyright for the musical compositions of all of AR Rahman’s songs are will be owned by him throughout his life and for 60 years from the year after his death.

The same principle goes for books, poems, paintings and other such works.

If the Work is Unpublished

When these works are not published, performed, displayed to the public, or offered for sale, then the copyright of the work will be valid for 60 years from the year such a work was created.

Anonymous and pseudonymous publications are also treated in the same manner.

Unlike literary and artistic works, the term of these works is calculated from the year in which there were first published or broadcasted.

The copyright for these works is counted from 60 years after the year in which it was first published or aired.

For Example, The Story of Cinderella was created by Charles Perrault in 1697. Since his copyright has long expired, the work has fallen into the public domain. That is the reason that there are several derivatives of these works created by multiple people around the world without seeking permission from the original creator.

The same principle is applicable to works of international organisations and posthumous publications.