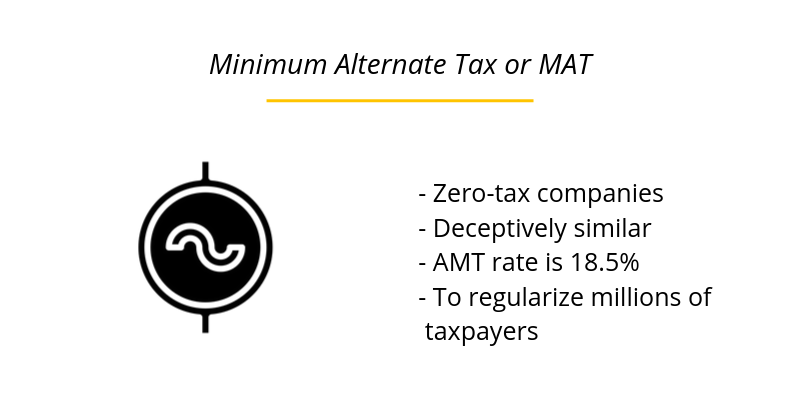 Minimum alternate tax is applicable for Companies and also for Limited Liability Partnerships (LLPs) who are required to pay a minimum tax based on the book profit of the enterprise.

If there were no concept of MAT, there would be numerous businesses and LLPs which would have booked profit as per their profit and loss accounts, but they would not be paying any tax because the Income would either be nil, negative  or insignificant income. In order to regularize millions of taxpayers like these, MAT had been introduced.

There is a major point of difference between book profit of a particular company and the income tax profit of a company. It is as follows:

Whereas, Income Tax Profit considerably allows the different incentives and deductions from the profit of the company.

Therefore, there is usually a significant difference in the final figures between the Book Profit and the Income Tax Profit of a particular company.

Thus, there are several corporates which conduct prior tax planning just like investments in the windmills, etc. and then try to minimise the liable incomes tax payments by considerably reducing their income tax profit.

The Minimum Alternate Tax (MAT) for the companies was introduced due to the number of zero-tax companies; wherein a company was declaring a book profit and then declaration of dividends to shareholders, while not paying any income tax.

This is because the income computed as per the norms of income tax act was either negative at times or negligible.

With the initiative to bring millions of such companies into the income tax net and to make them pay a minimum amount of income tax at the end of every financial year, MAT had been introduced in the year 1983.

For any company, the Minimum Alternate Tax rate which is presently applicable is 18.5% of the book profit for the assessment year 2015-2016. Thus, every company has to pay taxes as per this rule mandatorily.

If a particular amount of Minimum Alternate Tax paid by a particular company is more than the regular tax which is being paid, then, in that case, the excess amount is classified as the MAT credit and would be carried forward by the company to set off the future liabilities.

MAT applicable for the LLPs

Alternate Minimum Tax (AMT) which is similar to MAT applies for the LLPs. The various provisions of AMT will not at all be applicable to an individual or Hindu Undivided Family (HUF) or a Partnership in case the total adjusted income of that particular person or entity is lesser than 20 lakh rupees.

The prevailing AMT rate is 18.5% plus the education cess extra, making it the effective rate of 19.055%. Adjusted total income can thus be calculated accordingly.