The Reserve Bank of India issued ombudsman scheme for Non-Banking Finance Companies. The scheme will cover all deposit accepting NBFC's and will provide a cost-free and expeditious complaint redressal mechanism relating to deficiency in the services by NBFCs. 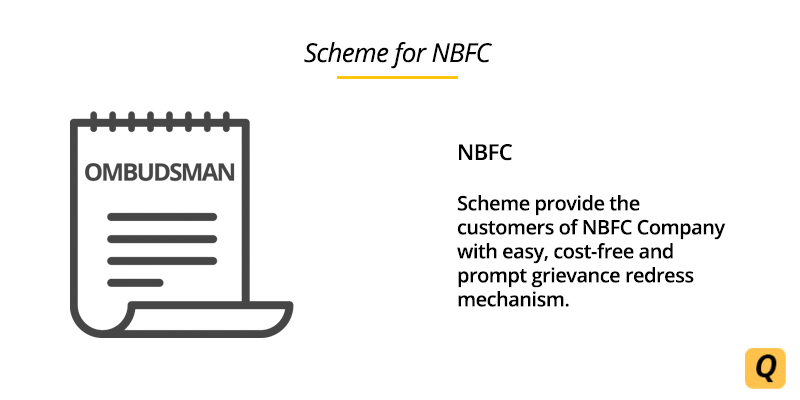 Ombudsman scheme was introduced by RBI recently to provide the customers of NBFC Company with easy, cost-free and prompt grievance redress mechanism. The ombudsman scheme for banks was a hit among the banking customers hence RBI aimed at releasing the same for Non-banking financial companies.

Ombudsman scheme for NBFC was launched on 23rd February 2018. The current ombudsman scheme would cover only the deposit-taking NBFC, effective immediately. The NBFC ombudsman is an official appointed by the RBI to work on the customer complains.

NBFC Ombudsman headquarters are located in four offices currently which include Chennai, Kolkata, Mumbai, and New Delhi. The customers can file a complaint in their respective zones, and the given offices will handle those complaints.

Procedure for Filing Complaint with Ombudsman

Non-Applicability of the Ombudsman Scheme

The scheme only covers deposit-taking NBFC’s hence this scheme is not applicable on the non-deposit taking NBFC with asset size of 100 crore rupees and above.

The following NBFC are excluded from the ambit of the scheme:

Any customer of an NBFC can approach Ombudsman with complaints on the following grounds stating deficiency in the services provided by them:

Rejection of the Complaint

RBI and Central government have vested power with Ombudsman to refuse the complaint which is filed with them, on the following grounds.

Any customer of Non-Banking Financial Company (NBFC) need not wait long for redressal of any complaints against the NBFC.

This scheme was launched to introduce contributive credit culture among NBFC. But if the customer is not satisfied with the award then they can approach the Appellate Authority appointed they can also take recourse of remedies available through law.