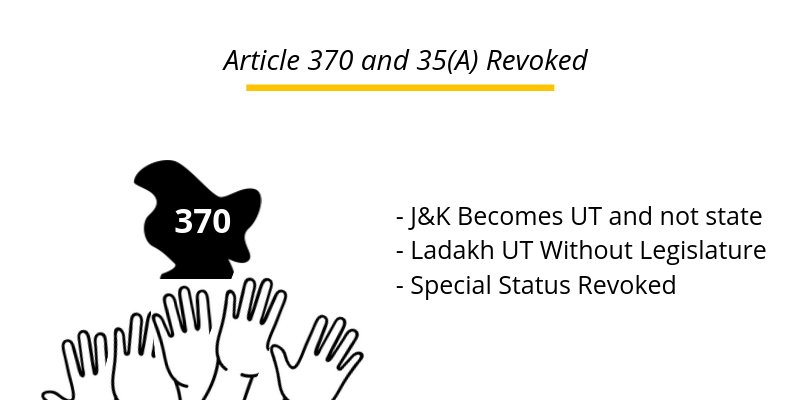 The Central government in the recent Rajya Sabha Session declared that Jammu and Kashmir would no longer have to witness Article 370 and Article 35(A). Moreover, both Jammu and Kashmir and Ladakh will be considered Union territory.

The Amit Shah’s big move to knife out the constitutional provisions that were previously imposed upon the state. The move for the country means that there will be 2 different union territory for India.

As per the Home Minister the Article 370 and Article 35(A) have created Kashmir as an island and is hence wholly against the unitary form of government which otherwise would have been possible.

The article 370 and Article 35(A) were the provisions which were drafted by Jawahar Lal Nehru and Maharaja Hari Singh. The provisions grant special autonomous status to Jammu and Kashmir and also state that the constitutional provision of India is not applicable upon the state.

On another hand, article 35(A) restricts and grants the state government to define who can be the permanent resident of the state. The article also restricts any outsider to own property and to get state Job in J&K.

The BJP’s move to remove article 370 and 35(A) is going to be objected in Supreme Court but since the state has no assembly, the decision to revoke the sections is going to stick as no legislative business can be conducted in the state.