The Union Budget for the financial year 2019-20 was presented by the finance minister Ms Nirmala Sitaraman on 5th July 2019. 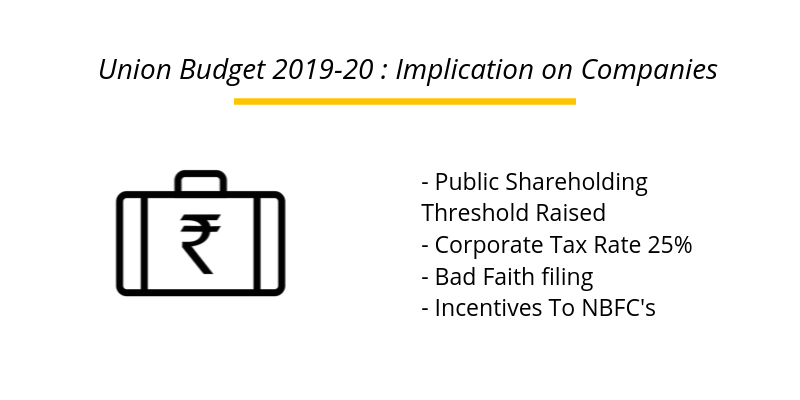 The GOI has proposed following additional tax benefits along with tax concessions which are already provided in respect of businesses being carried on from an IFSC unit.

As per, union budget 2019-20 now it is proposed by the government to provide for 100% deduction for 10 consecutive years.

IFSC has been allowed to claim the deduction, at their own choice for the next 10 years which was previously 15 from the year of incorporation.

Currently, the tax is charged on an accrual basis on the interest income on bad or doubtful debts made by NBFCs.

However, the tax is charged on receipt basis on the interest income on bad or doubtful debts made by the scheduled commercial banks, PFIs, State financial corporations, Co-operative banks and certain other public companies like housing finance companies.

As per the amendment made under Union Budget 2019,

Currently, the eligible start-ups are allowed to carry forward and set-off of losses.

Now, it is proposed to be relaxed enabling them to carry forward their losses on the satisfaction of any one of the two given conditions, i.e.

Further, the exemption of capital gains from the sale of residential property on investment of net consideration in equity shares of the eligible start-up has been proposed to be extended by 2 years.

The condition for a minimum shareholding of 50% of share capital or voting rights in the start-up is now reduced to 25%.

Incentives for resolution of distressed companies

Amendment in Income tax law has a critical impact on the revival of distressed companies. If tax laws are not aligned properly, it will impact negatively on the acquirer of the companies. The acquirer will have to bear high tax liabilities on waiver of debts.

As per Finance Act, 2018 relaxed the norms established by section 79 of The Income Tax Act, which allows to carry forward and set-off losses in case of closely held companies.

Note: The relaxation in section 79 is according to the approval of resolution plan under IBC

The continuity of shareholding for carrying forward or setting off losses shall not be applied.

Computation of Minimum Alternate Tax (MAT) liability of such companies is amended to with the finance act to lessen the hardship commonly faced by NCLT.

The amendment to section 115 JB of the Income Tax act makes it possible for companies to set off the aggregate brought forward of losses. The unabsorbed depreciation shall also be allowed as deduction.

Ease of compliance for small businesses:

The compliance burden is proposed to be reduced from small businesses and professionals.

To reduce the burden, the following measures have been taken by the Government: