Defunct companies or any company having NIL assets and NIL liability can file to ROC for striking their name off the registrar of the companies to avoid annual compliance cost under Fast Track Exit Scheme. 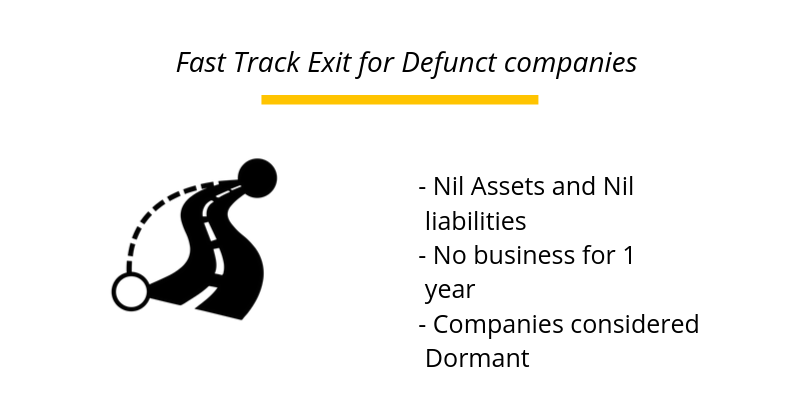 A defunct company can be defined as a company who has not been in business either since one year of its incorporation or has failed to deliver any business in the preceding two financial years. Such companies become non-operative and hence are required to file for dormant status.

Under what condition can a company apply for FTES?

A company can file for FTE status when;

Procedure for going under FTES

To close a company under fast track exit scheme, the company has to file for form STK-2 and pay a fess of INR 5000 to the ROC for striking off the name of the company. The detailed procedure includes:

A special resolution is passed in the meeting regarding the closing of the company which has to be approved by 75% of the board members.

An application is sent to ROC with form STK-2, with the prescribed fees along with

After receiving the application the Registrar of the Company shall examine the same, and if satisfied, they shall give notices to the company in form STK-5, STK-6 on the official website of the Ministry of Corporate Affairs, Official Gazette and at least in one leading English newspaper

The ROC shall also intimate the concerned authorities such as the income tax department, centre excise department to object if any within 30 days. If no objection is raised, then ROC can issue a notice in form STK-7 for striking off and dissolution of the company on the official website of MCA.

When can an application be rejected for filing FTES?

An application shall not be accepted for striking off the name of the company when a company: