GSTR 3B Form is an easy and simple tax return form, brought into action by the Central Board of Excise and Customs (CBEC). This return form is introduced for the calendar year of 2017, for the month of July to December. 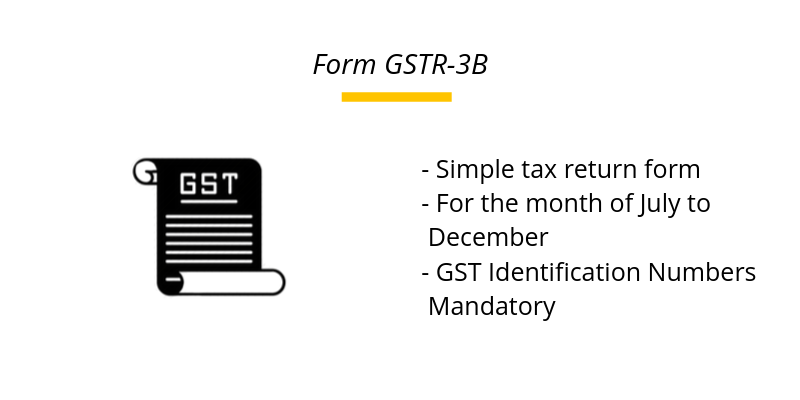 The GSTR-3b form came into being along with the advent of GST in India on 1 July 2017. This form is introduced to file the goods and service tax returns for the months of July to December in the year 2017. You must apply individually and separately for GSTR 3B return for all the GST Identification Numbers (GSTIN) you possess. You have to pay the liable tax for the GSTR-3B by the given due date for the particular month.

You should file your GSTR 3B of the current month within 20th of the upcoming next month. The GSTR 3B form is launched for the months of July to December of the year 2017. Therefore your due dates should be-

All of you, who are GST registered, must enrol themselves for the GSTR 3B return. You must fill up the GSTR 3B form and pay the return even if you did no minimum or maximum transactions throughout the span of these entire 6 months. The 6 months begin from July 2017 and end on December 2017.

But if you are someone who deals with one of the below-mentioned formats of business then you are not liable to pay the GSTR 3B return.

• If you are an Input Service Distributor, no need to file it

• Online Information and Database Access or Retrieval service providers do not come under this scheme. They are liable to pay their individual and own taxes under the IGST Act, Section-14.

• Even if you are a non-resident taxpayer then also you do not have to pay the GSTR 3B return.

Important Annotation on GSTR 3B

Filling up of GSTR 3B form is essential for you, the moment you possess a GSTIN. Say for a month; your business receives no minimum monetary transaction then also you have to register a ‘Nil’ return.

The annual rate of interest which is payable by the taxpayer is 18%. The interest rate is basically calculated as per the amount of the outstanding tax payment by the taxpayer. You have to file the GSTR 3B of the current month within 20th of the next month, without failure. Rs 200 per day will be charged as a Late Fee for not filing the GSTR 3B return.