How to Answer a Trademark Opposition?

At times, the applied trademark is opposed by a third party. In such a situation it is important to reply to the notice in case you do not wish to abandon your trademark. 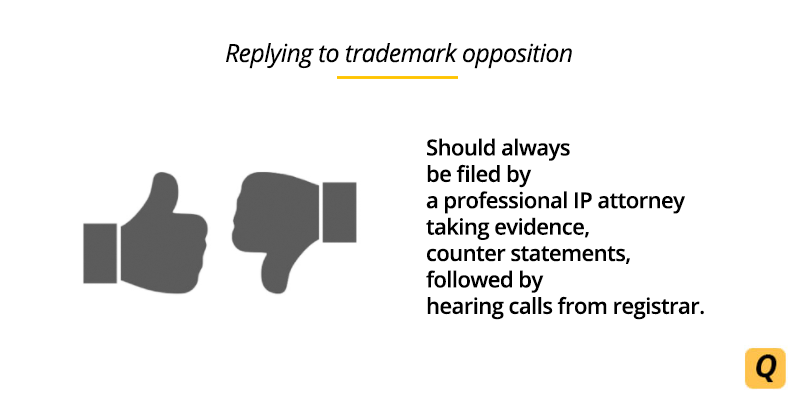 Trademark registration involves multiple stages where every successful step leads to publication in the trademark journal. Trademark acts as a brand name which provides an edge over others in the market and entitles you with exclusive rights.

The registration process is regulated under the Trademark Act 1999 by the Controller General of Patents, Trademarks, and Designs. Once the registration is initiated, it undergoes several examining to make sure the mark is distinct and appropriate.

What is Trademark Opposition?

Usually, the registrar reviews the application at every stage, and if he/she finds it satisfactory, then the trademark is advertised in the journal. During 4 months, any third party can oppose the proposed trademark.

The status of a trademark application changes to ‘opposed’ when a third party finds the applied trademark to be similar of an already registered trademark and applies to the registrar. There are different grounds on which a trademark can be opposed.

When can a Trademark be Opposed?

Anyone can file a trademark opposition if he/she witnesses any of the below-mentioned reasons in the applied trademark.

The Procedure of a Trademark Opposition

Trademark Opposition is a step-by-step procedure which can be filed by anyone including companies, partnership firms or individuals. It needs to be submitted to the same registration office where the applicant has applied for the trademark.

Receipt of a notice

Within 4 months of advertisement in the trademark journal, any third party can file an opposition notice to the applicant.

Replying with a Counter Statement

Once an opposition notice is received the applicant has a time limit of 2 months to respond with a counter statement stating the distinctiveness of his/her trademark. The trademark stands abandoned in case the statement is not sent within the time limit.

Evidence from the Opposition

Once a counter statement has been filed, the opposition party has to show evidence or proof in the form of an affidavit. It should convey why the party thinks the applied trademark is similar to the ones already registered.

Evidence from the applicant

The applicant also has a chance to show the relevant evidence in support of his/her trademark. For this, the applicant has a time of 2 months.

Hearing by the registrar

Before the registrar calls for a hearing for both the parties the opponent has an opportunity to respond to the applicant’s evidence within 2 months.

The registrar will review all the documents filed by both the parties and call for a hearing to which they have to reply within 14 days.

In the hearing conducted by the registrar, he/she will decide whether to register or reject the trademark. The decision will depend on the examining of all the counter-statements and evidence provided by the applicant and opponent.

Trademark opposition should always be filed by a professional attorney so that all the setbacks can be taken care. Also, conducting a trademark search before applying will let you know what all trademarks are already registered and decide accordingly to prevent any objection or opposition.