How to Handle Trademark Opposition? 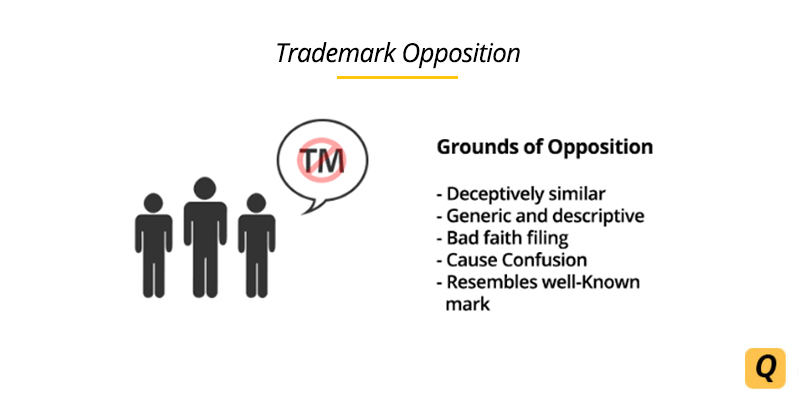 Who is entitled to initiate trademark opposition?

Once a trademark has been published in the Trademark Journal, the Trademark Office will provide an opportunity to the third party to oppose the registration of such a mark. Potential opposer who can be a customer, purchaser or someone in the public who is likely to use the goods and services.
Section 21 of trademark states that any person can file an opposition. It is not necessary for the applicant to be a person interested.

The period in which Opposition should be filed

An opposition proceeding for a trademark can be filed within 4 months from the date a logo or a mark is advertised in the  Trademark Journal.

Why would someone oppose your trademark?

The notice of Opposition can be filed at the Trademark Registry. The person, company or trust opposing will have to file Form TM-O along with the evidence of similarity or prior use along with it.

Generally, Trademark Opposition is filed for the following reasons:

If there exists a similarity between a registered mark or mark whose application is filed before the mark opposed on a condition that the mark is being used for similar goods as well.

A prior user is someone who has been using the mark prior to the person seeking registration but has not yet obtained registration for the same.

The trademark law prescribes that even though the person has registered the mark, he cannot stop the use of the mark, being used without registration.

The opposition to a trademark can be filed on various grounds, and grounds of TM opposition are mentioned in section 9 and 11 of the Indian Trademark Act.

If the mark seeking registration is deceptively similar to the mark of the opponent.

Phase- 1: Notice of opposition is to be filed with the trademark examiner using the Form TM-O within 4 months of the mark publication.

Phase- 2: The opposer will have to serve corroborating evidence along with the notice of opposition to the registrar as well as the applicant.

phase-3: Trademark examiner will serve notice to the applicant after verifying all the documents and evidence provided by the opposer.

Trademark applicant whose mark is opposed has to:

Phase- 1: The applicant needs to file a counter-statement for the mark opposed with the registrar with form TM-O along with the prescribed fee.

Phase- 2: Applicant will have to furnish evidence corroborating the counterstatement filed with the trademark office.

Phase- 3: Within 14 days a hearing is scheduled and based on the documents and evidence on record.

Also Read: How to Respond to a Trademark Opposition?

Cost of filing and contending opposition

Filing and contending trademark opposition can be both done with an application to registrar using Form TM-O. Following is the breakdown for both:

NOTE: The following cost of opposition will increase based on the number of classes the opposition has to be filed.

Trademark objection and opposition are both two different stages of trademark registration.

Before filing a trademark, you should conduct complete scrutiny of trademark publications done before so that when the mark is published in the trademark journal, it receives no oppositions.

The owner of the opposed mark will have to see whether the opposer is open to coexist, and agrees with mutual compromises. The trademark owner can then settle in the following manners:

Trademark registration is not the end. It is the responsibility of the trademark owner to keep a watch over other trademarks being registered, as it may cause a likelihood of confusion among consumers.