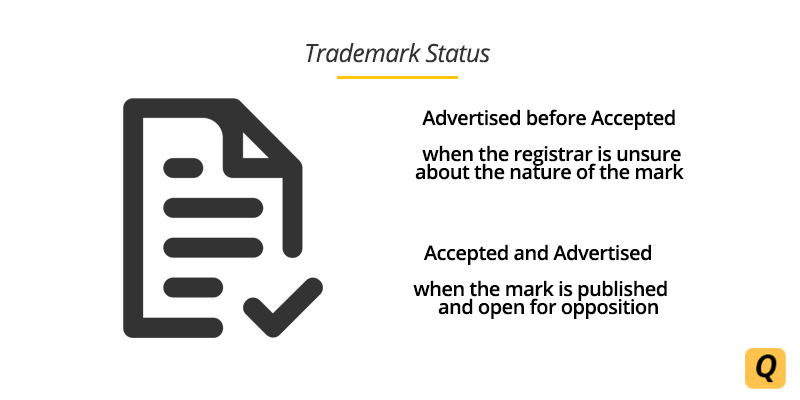 A trademark application is inspected at different stages of registration for the authenticity of the mark.

When an application is assigned to the Trademark Examiner, he/she scrutinises it as per the provisions laid down in the Trademarks Act 1999 especially according to Section 9 and 11.

If the applicant successfully clears all the objections raised on the mark (after examination report reply or a court hearing), the application goes through the next stage, i.e. advertised before accepted or accepted and advertised.

Your trademark application status is updated as Advertised before Accepted in case the Trademark Registrar is not convinced with the nature of the mark, i.e. its distinctiveness or as per the provisions mentioned in Section 9 and 11 of the Trademarks Act.

The Registrar may offer the application to be Advertised before Acceptance in the case mentioned above or any other exceptional situation.

This stage does not guarantee that the applied mark will get registered as the application has to be accepted by the Accepting Officer even if there is no objection raised by the third party.

Only when the officer accepts the application the status will change to ‘Accepted and Advertised.’

When the Trademark Registrar is completely satisfied with the distinctiveness and nature of the mark,he allows the application to be published in the Trademark Journal and be reflected as Accepted and Advertised.

But for the mark to be registered successfully, it must not receive any objections from the third party. After which, the mark will get registered, and a certificate of registration will be issued to the applicant as legal proof of the same.

There is a bit of similarity between both the stages as –

But here is a thing!

The Accepted before Advertised status can be used as grounds for Trademark refusal by the Accepting Officer, on the pretext that the mark doesn’t distinctively distinguish the products and/or services that it represents.