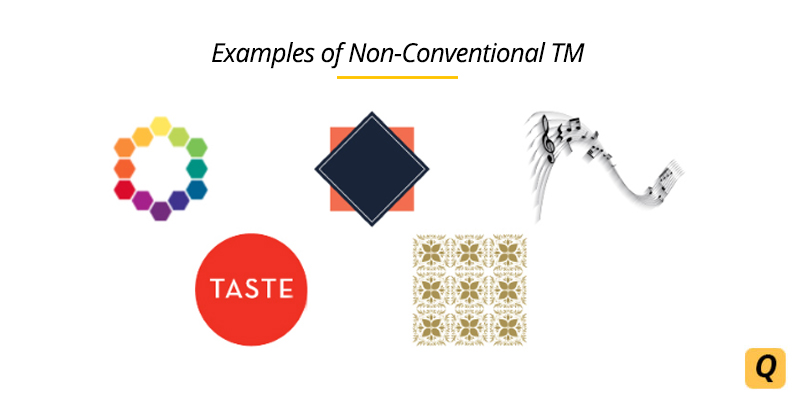 In this scientific know-how world where the business is moving at a steady pace enticing the customers to gain their attention by devising unique identities, non-conventional trademarks are of recent origin.

A conventional trademark customarily dwell and consist of letters, words, logos, pictures, symbols, numerals or a combination of one or more of these elements.

However, a non-conventional trademark is not bracketed in the same parameters. Trademark registries and courts deal with trademarks applications for:

The stepping over the conventional is a result of the open-ended definition of a trade mark.

What is the scope of Trademarks?

Trademark encompasses a definition which emphasizes the functional status of a sign rather than on the ontological status.

Anything that does the communicative work of a trademark, by casting a difference between the goods on the basis of trade origin can be registered as a trademark.

Over time, the registration system has changed and developed historically around quintessential subject matter – a conventional or traditional trademark constituting of figurative devices or words.

What is a Non-conventional Trademark?

Some features of such trademarks are:

India’s recognition of such marks is a streak of the maturing intellectual property regime in the country.Some example of Non- Conventional trademarks are:

What constitutes a non-conventional trademark?

The graphical representation of the colour must be precise, clear, easy, self-contained, easily accessible, durable and objective which is known as Sieckmann criteria.

While considering the registration of colour per se as trademark personal interest of a single trader has to be weighed against the public interest of not unduly restricting the availability of colours of all traders.

Distinctiveness without prior use is unlikely to be present in a colour per se mark other than in exceptional circumstances. However acquired distinctiveness may be present.

After which, the entry of the mark in a public register has the aim of making it accessible to the competent authorities and the public, particularly to economic operators.

The Object of the representation is specifically to avoid any element of subjectivity in the process of identifying and perceiving the sign.

This depends on the audile i.e. the hearing perception of the listener which may be as momentary as the sound itself.

It can be represented graphically, particularly by means of images, lines or characters, and that its representation is clear, precise, self-contained, easily accessible, intelligible, durable and objective.

Those requirements are satisfied where the mark is represented by a counteract divided into measures and showing, in particular, a clef, musical notes and rests whose form indicates the relative value and, where necessary, accidentals.

Echoic specification or mere sequence of musical notes would not be sufficient for the purposes of graphical representation for the pitch and duration of the mark cannot be determined by them.

Smell of rose for tyres, smell of freshly cut grass for Tennis balls The odour of beer for dart flights Smell of plumeria blossoms for yarn Smell of vanilla for office files Cherry scent for synthetic lubricants.

Trademark may constitute a sign not capable of perceived visually but of being represented graphically.

The graphical representation must facilitate the sign to be visually represented by way of images, lines or characters so that it can be precisely defined.

Representation should be apparent, explicit, durable, self-contained and easily assessible.

The core requirements for registering are:

However, in a case where a distinctive character has been acquired- the use made of it. It should not exclusively constitute of the shape resulting from the nature of the goods themselves.