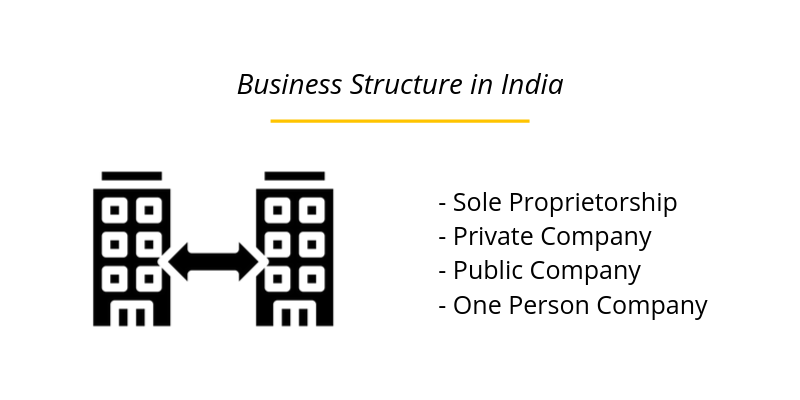 In order to run a successful business, ideas and investment alone is not sufficient.  Hence, many entrepreneurs think of choosing a business structure.

Some of the business structures which is prevailing in India are as follows:-

A sole proprietorship is considered as one of the simplest forms of business. Such business is owned and controlled by a single person who is referred to as a sole proprietor.

A sole proprietorship is very easy to establish and requires a nominal cost; all a sole proprietor needs to do is to get his name registered with the registrar of a company within whose jurisdiction a person wants to carry out his business.

One of the freedoms a person enjoys under sole proprietorship is that he is not obligated to report to anyone during the course of business and he also has the freedom to take an independent decision. Under Sole proprietorship formalities such as meeting and voting in an association of complex business is not necessary.

One of the greatest advantage of a sole proprietorship is that such that of a business structure requires less capital and is easy to establish.

Death or incapacity of its owners

Owners of a sole proprietorship cannot raise capital by selling an interest in the business.

According to Section 2(68) of Companies Act, 2013 defines a private company as one whose articles of association restricts the transferability of shares and prevent the public at large from subscribing to them.

In order to start a private company, it is necessary that a minimum number of two members are required.

In a private company, the liability of each member is limited. It means that if a company faces any kind of loss then the shareholders can sell their own assets.

It means that the company continues to exist even after the death or insolvency of one of its partners.

Section 149 of the Companies Act, 2013 states the requirement of companies director in a private company as a minimum of 2 directors and a maximum of 15.

Note: Number of directors can be increased further by amending AOA and MOA

Prior to amendment, there was a restriction upon a private company to have a minimum paid-up capital of Rs 1 lakh or a higher amount which has been changed over time and the restriction has been removed.

In a private limited company, there is no need to issue prospectus because in such type of company public is not invited to subscribe for shares.

One of the major advantages of a private limited company is that shares can be sold or transferred to the other people on the basis of the owner’s choice.

In the case of a private company, the number of shareholders required will be 2.

A private company is not under a compulsion to disclose to the public about the financial report every quarter.

Restriction On Transferability Of Shares

One of the disadvantages faced by a private limited company is that is facing a certain kind of restriction in relation to shares.

Cannot Issue Prospectus To The Public

Another disadvantage faced in private limited company is that it can only issue prospectus among the members of the company and not to the public.

As per Section 2(71) of the Companies Act, 2013 defines a public company as one which trades it shares freely in the stock market as compared to other companies.

For the formation of a public limited company number of members required is seven.

The liability of members of a company with respect to the value of shares is limited.

A public company continues to exist even after the death or incapacity of any one of the partner.

The companies act, 2013 clarifies the requirement for a public company and the number of directors required:

the minimum number of directors required should be 3

One of the significant advantages of a public limited company is the ability to raise capital by issuing public shares.

Even if anyone of the partners dies or is incapable to run a company still the company continues to exist in a public limited company.

One of the biggest disadvantages of a public limited company is that there will be transparency of business operations.

Another disadvantage of a public limited company is that it requires high cost, time and effort. So those companies who are looking to make a huge profit need to put in huge investments.

Section 2(62) of the Companies Act, 2013 defines one person as a company which has only one person as to its member and he also acts as a director.

According to Section 2(92) of the companies act, 2013 defines unlimited as a company which has limited liability on its members.