Directors Will Have to Soon Take an Exam to Show Competency 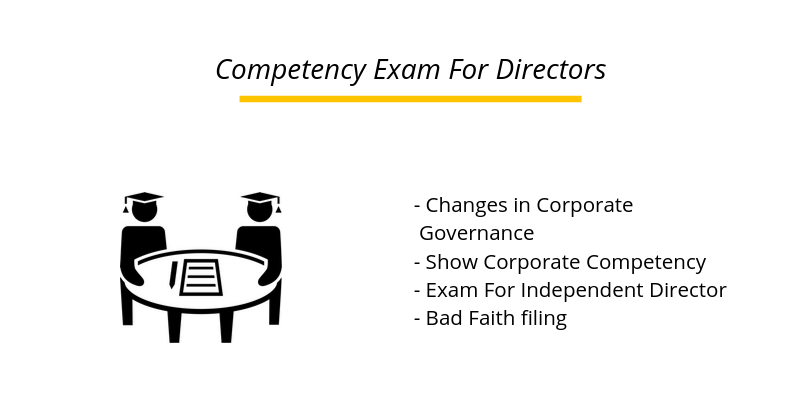 As per the current applicable corporate laws in India, the company board needs to have at least 30 % of their directors as independent directors. These directors act as scrutineer or observer for the company affairs and keep a check on any wrongdoings that might occur.

Whenever a company is investigated or is in specific financial crises, the directors of the company usually plead ignorance and excuse themselves from the mess the company has landed in.

Company Directors will have to take exams for Ethics and Law

The government proposes to bring amendment in the companies’ rules,2014 and for agencies like IICA to create data of all the independent directors. The government of India can direct institution or agencies to maintain such data as per section 150 of Companies Act,2013.

The government is dedicated to bringing into effect the changes in the companies act so that they could bring effective changes in corporate governance.

Exam for the independent director is still a proposal, but the Indian government is taking the said proposal seriously and is consulting the stakeholders as well as they also don’t want to discourage any individual that wants to become a director.

Why the Need for Examination?

The resent investigation on companies like IL&FS brought forward serious fraud allegations where it was seen that the company’s officials had not dealt in due diligence.

And hence the MCA or the corporate ministry thought it is necessary to assess the independent directors upon their appointment as a board member in the company.

Even though the companies act has stringent provisions for maintaining and ensuring good governance still when it comes to companies such as private limited companies the directors have limited liability and hence can appeal ignorance of such activities.

The proposed directors will have a stipulated amount of time in which they can clear the exam, although they will have unlimited attempts with them.

Note: The directors will have to clear the exam before they can be appointed as one in any company.

The company directors that are operating on the position for an extended period of time will be exempted from such examination although they will have to register themselves up for the database that is being formed by the government of India.

“The corporate ministry wanted to demolish the myth that the independent director of the company has no fiduciary duty and we also want to propagate corporate literacy in India by making them aware of their duties and responsibility.