Importance of Appointing An Auditor

After incorporating a new company, it is mandatory for the Board of Directors to collectively appoint an auditor for the company who is responsible for reviewing and evaluating company’s financial statements for a term of five years. 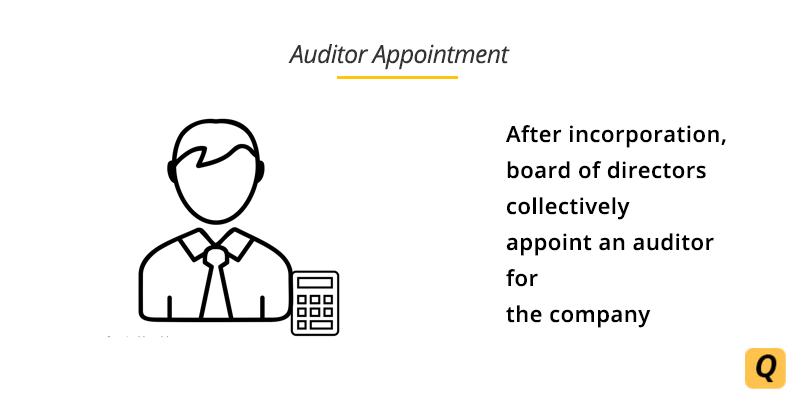 Who is an Auditor?

An auditor prepares and examines a company’s financial records and makes sure that they comply with the law. Auditor plays a vital role in the stakeholder of the company. They audit the books of accounts of the company and report to the shareholders regarding the affairs of the Company carried out by the directors of the Company. Only a qualified Chartered Accountant within the Chartered Accountants Act, 1949 can be appointed as an auditor.

Rules for Appointing the Auditor

What is the tenure of the Auditor?

What is the status of the Auditor?

An auditor makes sure to check that the company’s financial records and accounts fully comply with the law. An auditor helps the company from adhering to any fraud by checking its counting methods and procedure to comply that all its finances are legally authentic. An audit by a licensed independent auditor lets a company and its creditors know where it stands concerning following standard accounting principles and guidelines.

What are the liabilities given to the Auditor?

Who can be appointed as the Auditor?

NOTE: in case of his absence anyone from his firm can perform his duties.

Points to be considered while appointing Auditors

NOTE: in some cases, government approval is required

Procedure to be followed for appointing Auditor

Appointment by Board of Directors

Appointment of the 1st auditor of the company is governed through section 139(6) along with non-obstante clause and is appointed within thirty days of the company’s incorporation. ADT-1 to be filed with ROC along with documents like:

Appointment through a general meeting

Note: 14 days prior, a notice is sent to the members for scheduling the meeting

Appointment of Auditors other than first Auditor

In every AGM, a shareholder appoints an auditor who holds the office until the conclusion of the subsequent general meeting. The auditor must be informed about the appointment within seven days of appointing. The auditor has to send in writing his acceptance or refusal to the ROC within 30 days.

If no auditor is appointed by BOD or by a special resolution or the auditor does not give his consent or is declared void then the auditor, then the company needs to apply to the Central Government. Along with the names of the auditors chosen by the company out of which the Central Board appoints one. If the company does not apply in the given time, then it is entitled to pay a fine to the extent of INR 500/-

Re-Appointment of the Auditor

As per section 139(2), companies cannot appoint or re-appoint:-

Who is not eligible to be appointed as an Auditor?