Ministry of MSME has a number of schemes and programmes for strengthening and also helping and assisting small business entrepreneurs. These schemes aim at providing Technological Upgradation by providing them assistance with these subsidies. 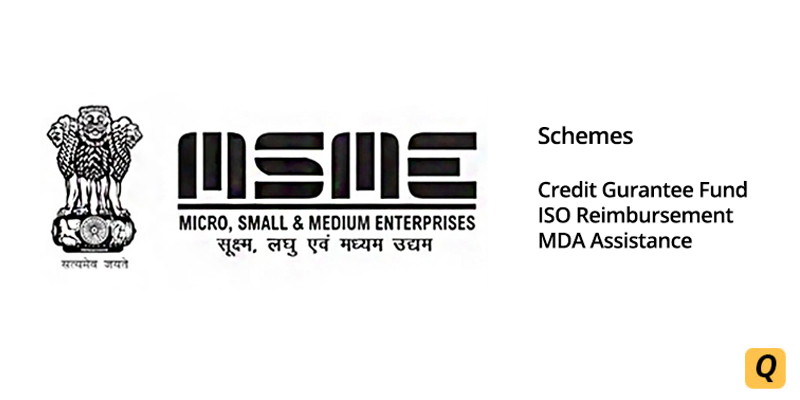 Indian economy thrives through the creation of small enterprises; they play a vital role in strengthening the Indian economy. MSME sector has a potential of tapping individuals to associate with economic activities by way of self-employment.

The unique feature of MSMEs is that they are widely dispersed across sectors of the economy producing a diverse range of products and services to meet local as well as global markets. Ministry has been engaged in finding solutions to the issues related to enterprise promotion and development.

The schemes launched by the government are an endeavour which will benefit all the first generation entrepreneurs in establishing their business in India.

The measures laid down by the government are classified as:

The measure which is taken with the sole purpose of promotion and growth of the small and medium scale sector in the service or manufacturing sector of the economy.

The government has taken initiatives and set up various other agencies which look into other sectors of the economy which deal with the assistance which is provided to the small-scale industry in the market.

Government of India has formed following schemes for the development of the MSME sector :

The Ministry of Micro Small and Medium enterprise has established a trust for the companies named Credit Guarantee Fund trust for micro and small enterprises (CGTMSE). This scheme was launched in the year 2000 on 30th August.

Ministry of Micro and Small Enterprise with the help of the government of India has started providing collateral free loans or credit to MSME sector. The government launched this scheme because MSME was dealing with the problem of non-availability of timely credit from the banks as banks considered giving loans to small-scale industry a risk.

Certain modifications have been made in the credit guarantee scheme recently

Financial institutions that are eligible under this scheme to lend are Scheduled commercial banks which include public sector banks, foreign banks, and private sector banks. In total there are 133 eligible lending institutions.

Small companies are eligible to receive credit facility under the scheme for both term loans Up to 1 crore rupees per unit. This credit facility is provided to all, existing and new MSME’s without any collateral security.

The guarantee cover under the scheme is for the agreed term, in case of working capital is for five years.

Economic liberalisation and market reforms have opened up the small-scale sector to global competition. To enhance the competitive strength and power of small-scale industry in the worldwide competition. The incentives under this scheme are provided to the small-scale undertaking which has attained ISO 9000/ISO14001/HACCP certifications. The assistance provided to these companies is to the extent of 75% of the expenditure subject to a maximum of Rs 75,000 in every case which is applied.

Market assistance scheme has been announced with a view to increase participation of representatives of the enterprises which are participating in the scheme. The scheme offers funding up to 75% in respect of expense which is made while going overseas for fairs and any trade delegation. MSME’s and industry associations can apply for the rebate under this scheme.

These schemes were launched by the government to smooth the progress of operations involved in acquiring resources. There was also a vital need to include measures to manage the problem of any loss in the financial benefits in case of MSME that are evolving into larger enterprises.