Delhi High Court in its recent order has proposed that “Vistara” to be declared a well-known trademark in India and has restrained an online portal from using the registered mark on its product. 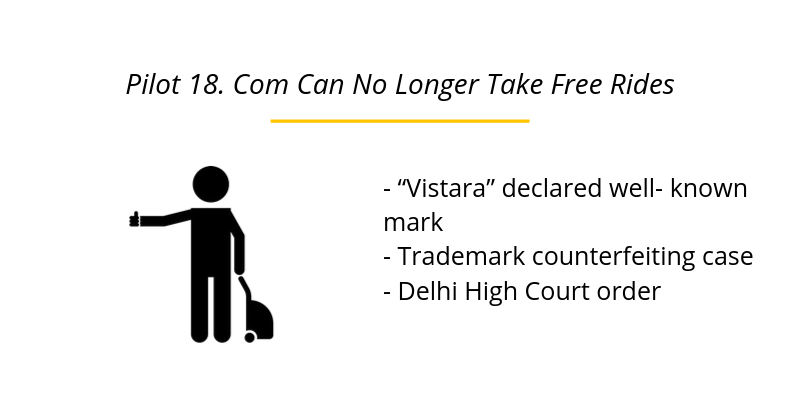 It’s time to rejoice for TATA-SIA airline, as they have just won a trademark counterfeiting case against Aviation book store Pilot 18.com.

High Court has restrained the site from using the airlines' well-established trademark “Vistara” on its products. Delhi High Court, Justice Pratibha M Singh has imposed charges of 2 lakh Rupees which are to be paid to Vistara within a month.

NOTE: The high court imposed the ban on the use of the trademark on the ground that, it poses a security threat.

Use of Impugned Mark

The cases were filed by the TATA-SIA Airlines Ltd which was registered in India on 5th November 2013 and is a public limited company with over 5000 crores authorized capital.

The company representatives found the portal using the mark on its e-commerce portal for products like mugs, baggage tags and other accessories bearing the name of not just one airline but others as well.

The defendants were also selling products on other sites such as Amazon and Snapdeal with the products bearing the identical marks.

“Vistara” to be Well-Known Mark

As per Delhi HC, the mark “Vistara”  is well known among consumers and they associate it with the airlines completely; hence anyone that uses the mark will be deceptively taking benefit of their established goodwill in the country.

The court has declared the use of the mark even in an unrelated class to be a case of trademark counterfeiting. The court also declared that the mark Vistara should now be established as a well-known mark.

The court has imposed Permanent ban on the use of the mark by the portal for any of its product and is also being investigated for perjury for the false plea issued by the representatives of Pilot 18.com.