A third party usually files an opposition when there is a similar trademark published in the Journal or if the trade mark is alleged to be non-distinctive. The trade mark status changes from “Advertised” to “Opposed” when a notice of opposition is filed by a third party. 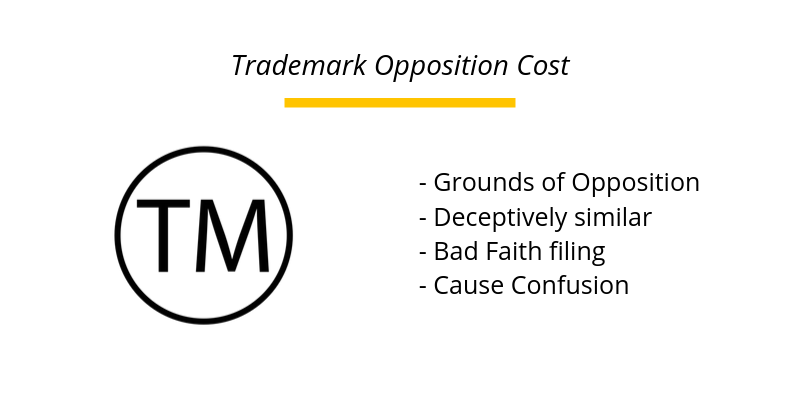 Trademark opposition costs vary for the opponent and the applicant, though it is considerably less than the filing costs.

For the opponent, the costs of filing an opposition notice in the prescribed form (Form TM-O) is INR 2500, provided the same is filed within the period of 4 months from the date of advertisement of the trademark application in the Trade Marks Journal.

In case extension of time is to be requested, the same needs to be done through Form TM-44 with a prescribed fee of INR 500.

The applicant needs to file a counterstatement in Form TM -6 paying a prescribed fee of INR 1000.

At the stage of filing evidence in support of opposition and application, differing costs apply to both the opponent and the applicant, as per their individual attorneys. Nominal costs are involved in filing evidence on affidavits and completing legal formalities in respect of them as well as serving each party copies of evidence filed.

Where the Registrar deems fit for either the opponent or the applicant to file further evidence, the same can be done by the allowed party through an Interlocutory Petition (IP) by paying the prescribed fee of INR 2500. Where extension of time is sought under section 131 of The Trade Marks Act, 1999 the same can be filed in Form TM-56 along with the requisite fee of INR 500.

On the scheduling of a hearing, any party who intends to appear for the same needs to notify by submitting Form TM-7 and paying the prescribed fee of INR 500.

If either party seeks adjournment of a hearing, the same shall be done via Form TM-56 along with payment of INR 500. Grounds for seeking adjournment though, must be genuine and the Hearing Officer must be reasonably satisfied with the reasons tendered.

If a correction or an amendment is sought to be made in either the Notice of Opposition or counterstatement of the applicant, if allowed by the Hearing Officer, the same shall be done by submitting Form TM-16 along with a fee of INR 500.

A request for division of a multiclass application, the same shall be filed on Form TM-53 with a fee of INR 1000 plus additional class fees as applicable.

For a counterstatement filed by an applicant in respect of a collective mark or a certification trade mark under sections 64, 66, 73 or 77, the fee would be INR 1500, filed on Form TM-9.

Apart from the individual fees required for any/more of these stages, attorney fees lie separate and vary as per the standing and experience of the attorney.