What are Patent Trolls?

Patent trolls are shell companies that are commonly referred to as non-practising entities(NPE), that produce no products but file dubious patent infringement suits. Through these suits, they are known to extract money from commercially productive companies 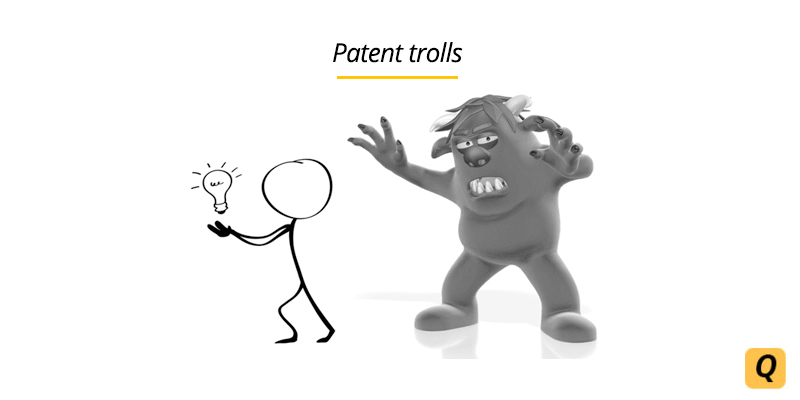 The term 'Patent Troll' represents patent blackmailer or extortionist. Trolls are basically companies that have no business operations other than to generate revenue from filing patent litigation.

The basic goal of these companies is to explicitly use patent litigation to leverage themselves up.

What are Non-Practicing Enterprises (NPEs)?

Identifying these companies with their activities is a better approach to save oneself from the predicament.

The concept of patent troll can easily be understood through the reference of HBO's sitcom "Silicon Valley" where the lawyer tries to extract money from a struggling startup by threatening them with a patent infringement suit.

How Big of a Problem are Patent Trolls?

Patent lawsuits asserted by patent trolls are a nuisance for the companies that have to pay in order to make the lawsuits go away. NPE's opportunism can further be witnessed by the fact that they aim litigation on firms that have reduced the ability to defend themselves.

The Patent trolls have filed up to 84% of hi-tech patent lawsuits against companies. The practice of filing patent litigation is on the rise. Over thousand's start-up companies face patent troll issues at least once in a year.

For startups, the frontline issue while fighting patent litigation is not only the cost of litigation but also the problem of attracting investors. As it is commonly seen that investors rarely go for startups that are fighting litigation.

Note: NPE's are known to send Cease and desist notice to companies so as to scare them off.

How to stop them

Patents owned by NPE's are not used at all and as per the steps were taken by the government to weed out such entities, the person sued can file for the revocation of a patent owned by such entities.

Hence, these laws prove to be problem solvers for companies sued.

The following steps can help you deal with these patent trolls:

A patent was granted to Mobile Telephone, which specified the technology for multiple SIM cards of different communication devices in favour of Shri. Somsundram Ramakumar on February 11, 2008.

The patentee had filed a report with the patent authority but amended the claims which were then considered to be too broad to include any kind of inventive step, and hence the IPAB revoked the patent application.

The decision was considered victory by both the companies.

Apple and VirnetX: Apple loses the battle against Patent Troll

VirnetX was paid 500 million dollars as payment against the patent litigation suit. The case was based on patent rights on Apples products ‘iMessages’ and ‘FaceTime’.

VirnetX is a patent Assertion Entity/NPE and its entire business structure is based solely on litigating against companies that develop and sell products, based on unknowable patent infringement laws and uncertain interpretations of intellectual property rules and regulations.

Apple and VirnetX have an ongoing litigation proceeding since 2010 when the patent-holding company made a statement that iPhone maker had infringed upon four of its patents related to Internet-based communications.

The federal court of US ruled in favour of VirnetX and hence, Apple was directed to pay 500 million.

Blackbird Technologies filed a patent litigation suit against Netflix on their new download features "CD-Rs by mail", which was introduced recently by Netflix.

The download feature in Netflix has been sued based on the patent application filed in the year 2000. Over 362 of their patents cover various "Method and system of digital data duplication". For instance, services like DIRECTV were sued and settled recently.

The patent 'CD-R s by mail' is owned by company Black Bird Technology, with no products or services other than patents. The main object of the company is to launch a litigation and squeeze out settlement cash from the companies.