How Have Patent Rules Evolved in India?

Patent protection is an industrial property, meaning, it's an intellectual property asset that has industrial use. The roots of Patents in the Indian legislature can be traced to the1856 - when the first Patents Act was introduced. Since then, the law has evolved and has matured into legislation that conforms with the obligations of all international treaties. 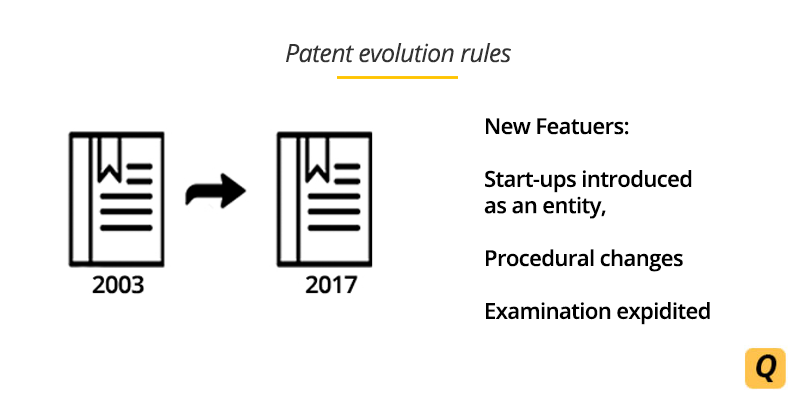 A patent gives the owner of the invention a 'monopoly right' to use his invention. Along with the increase for the need for patent protection in India, the Indian patent law has witnessed sweeping events.

Recently on December 1, 2017, the Patent Rules were amended to bring in various new features that were announced by the Government of India.

The current amendment is substantial for the Indian Patent regime and can certainly have an impact on the patent filing and prosecution strategy, among other things.

First legislation of the Indian Patent Act was first introduced in the year, 1856 with an objective of encouraging useful and new technology. The Patents Act was introduced with the basic purpose of inducing inventors to provide complete disclosure of the working of their invention.

To aid intellectual property created within the budding Indian start-up's ecosystem, the amendment has provided several incentives including reduced administrative fees, filing and prosecution assistance by experienced patent agents a.

The amended Rules have also defined a “start-up” as a new company or a registered Partnership firm that:

The application will not be processed further unless the applicant rectifies the deficiency by filing POA.

It has been made necessary for patent agents to correspond electronically with the Patent Office and all the patent filings to be done through an online portal.

Who can expedite Examination process?

The Controller has the power to limit the number of request for expedited examinations that would be received within that year.

Amendment in the Patent Rule has reduced the time period for filing response to the first examination report. Before the amendment, the period for reply was 12 months which has now been reduced to 6 months.

The new timeline is only applicable on applications that are filed on or after May 16, 2016.

More on: Procedure of Patent Registration in India

4. Restriction on Adjournments and Remote Hearing

The applicant who is not currently in India can conduct hearings through video conferencing or through any other similar means of communication.

Request for an adjournment can be made 3 days prior to the date of hearing. The number of adjournments has also been limited to 2 and the days for the same should not exceed 30 days.

Amended Rules allow a Patent Cooperation Treaty (PCT) applicant to delete or alter the claims in the national phase of PCT application in India to reduce excess claim fees.

Also Read: What is "Patent of Addition"?

Sequence listing generally involves isolation and purification of cDNA, DNA and RNA. The invention is generally related to the modification of fungi, bacteria, plants and animals.

Such patent application requires disclosure of amino acid sequences in the patent specification, which was to be done both electronically and physically before amendment in the patent act.

But, now after the amendment of the patent act, the sequence listing can be filed electronically without any requirement of filing it physically with the patent office.

The maximum sequence listing fees have also been mentioned in the patent rules as 1,20,000.

Unlike in the past, the opponents and the applicants have to serve a copy of their representations and replies on each other, respectively. Also, it has been mandated for the Controllers to pass a speaking order, whether the application is to be granted or refused.

Foreign filing license request is to be disposed of within 21 days from the date of the request. In case of inventions relating to defence or atomic energy, 21 days would be considered from the date of receipt of consent from the Central Government.

Also Read:  Everything about Patent Prosecution

The amended Rules endeavour to increase the efficiency of patent procedures with the intent of diminishing the waiting time in the examination of the application and providing other benefits to the applicants.