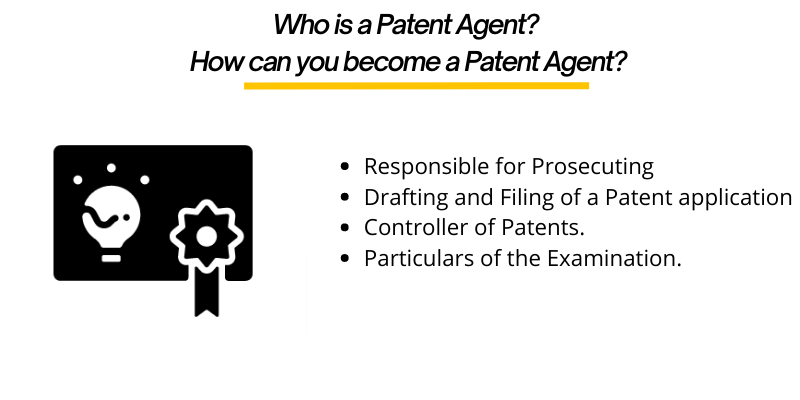 Who is a Patent Agent?

Who can become a Patent Agent?

Any person who meets the following qualifications as mentioned in Section 126 of the Act, can become a patent agent, namely:

One must note that before the Patent Amendment Act, 2005, in addition to a degree mentioned in point (iii), a degree in law was required to qualify as a patent agent.

Role of a Patent Agent

The role of a patent agent is enumerated in Sections 127 and 129 of the Act. It further inter alia states that a patent agent has (i) the right to practice before the Controller of Patents; and (ii) to prepare all documents including but not limited to specifications, proceedings and to do all such acts, as the Controller may require.

Procedure for registration as a Patent Agent

Rules 109, 110, and 111 lay down the process for registering a patent agent under the Act. The Rules inter alia provide for the following:

Application to the Controller for Examination:

Any person interested in appearing for the qualifying patent agent exam (conducted once each year) shall request that the Controller state his intention to appear in such an exam. Such request shall be made to the Controller vide a letter addressed to the nearest Patent Office upon the prescribed fees, i.e., Rs. 3200 (if online) or Rs. 3500 (if offline).

Particulars of the Examination:

The examination shall inter alia include two written exams (100 marks each) and a viva voce (50 marks). To qualify as a patent agent, the candidate must score a minimum of 50 marks on each paper and an aggregate of 150 marks or more. To apply for the exam, the candidate must meet all the requirements stated in Section 126 of the Act.