OPC has some drawbacks on account of constraint conversion, restriction of doing some business activities, ownership limitation, restrict foreign investment. 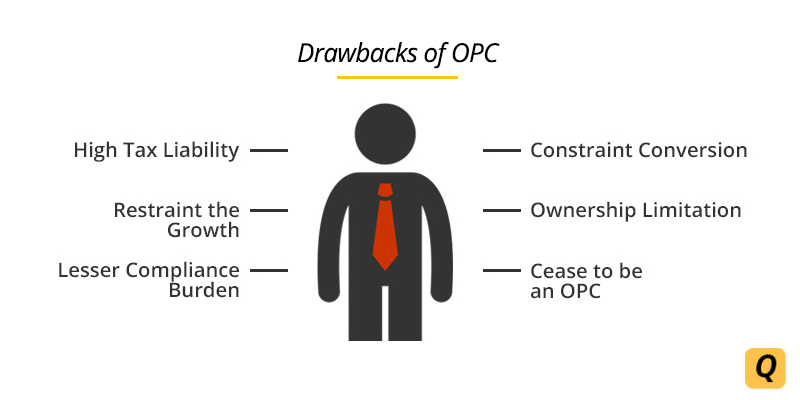 Restrictions of One Person Company

Starting any business venture is ambitious yet a risky responsibility. One must fully analyse his options and study what is the most suitable structure for his business be it one person company or sole proprietorship or a private limited company as all of the above have their own pros and cons. These compliances have been introduced to promote business enterprise owned and operated at small or mid-level to help in growing country’s economy and employment services. Hence the person should be thorough with his choice

Disadvantages of One Person Company

Is one person company same as a private company?

One Person Company and private limited companies aim at providing legal protection to small unorganised businesses to be legally authorised. Apart from having common similarities, they both have certain differences

Thus we conclude that one person company was introduced to help the country’s growth by giving opportunities to generate employment and also help in economic development. The one person company was created to simplify the legal process for young entrepreneur venturing into new businesses as it has been very successful in western countries like US and UK. This has been welcomed with open arms in our country as well and we look forward to its outcomes and impacts and hope that it proves to be a successful concept.