Harley Davidson recently filed designs with the European Union Intellectual Property Office (EUIPO) for three different bikes which are supposed to be launched in 2020.

Harley Davidson is a well known brand for motorcycle manufacturing which is known to be customer loyal and quality. It also markets products like apparel, home decor, ornaments, toys, accessories and figures of its bike.

The company has filed a patent application with the EUIPO including designs for the bikes which are to be launched in the coming year. The three bikes are Pan America with 1250 cc v-twin engine, Streetfighter and custom 1250.

The designs of these bikes also include saree guards which points at their launch in India as well or primarily made for Indian people. The company had revealed the design of one of its bikes Pan America last year however; there are some changes in the prototype illustrations.

The changes can be seen in the cast wheels, off-road style handlebar guards, radiator crash guards and a large windscreen (adjustable). Pannier mounting points are also revealed under the pillion seat towards the rear of the bike.

As revealed in the patent filing, all the bikes have v-twin engines but it is still not clear as to how much displacement the other two bikes will have i.e. Streetfighter and Custom 1250. An evolution in the Street serious in the form of a naked roadster and a saree guard along with an engine displacement of 500cc to 1200cc is also revealed. 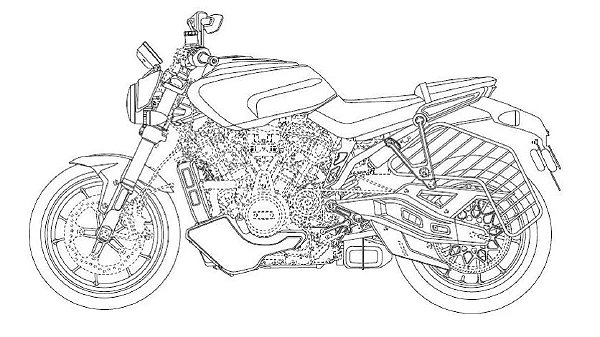 The Streetfighter model displays fat upside-down forks with a deep belly pan under the engine. The images of the second bike are also found similar to what was revealed last year. The third bike is a flat-track style cruiser with Bobber-style fat tyres and a futuristic front end.

All the patent images are drawn in straight and dotted lines which represent that the straight lines form a part of the earlier design while dotted lines are the changes made to the design. This might mean that the famous bike manufacturing company will more likely borrow parts like clutch levers, brake levers from other models.

Harley Davidson has also launched Live-Wire which is an all-electric motorcycle and announced the launch of almost 100 bikes by the year 2027.