Responding to a Cease and Desist Letter

It is important to not get threatened by a Cease & Desist letter and think through things calmly, which helps to adopt the best course of action. While not many small-time entrepreneurs and creative professionals have business advisors, it is advisable to also consult people who can look at the business side of this situation and help you lay a strategy that will prevent your business and money from being swamped by a bigger business and its justified/unjustified claims. 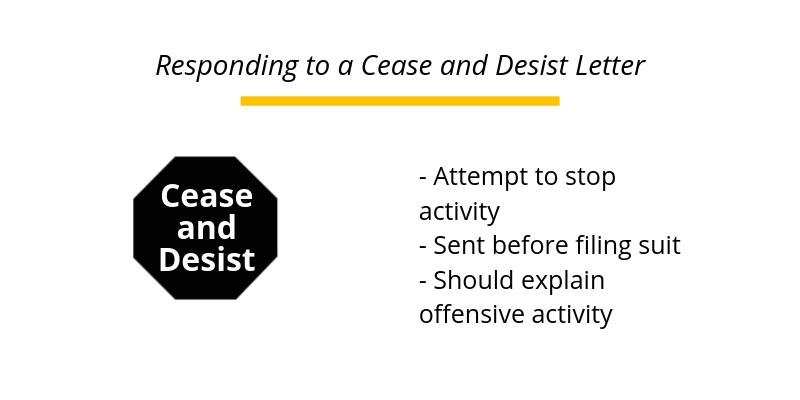 This rise of stolen creative material, counterfeit products and fudged services in the market today brings to light the menace of trademark misuse and infringement, which can be timely countered if the registered proprietor is sufficiently alert to guard his ownership of trademark rights.

The Cease and Desist letter, also known as infringement letter or demand letter, therefore, is a cost-effective means employed through which an individual or a business is demanded to halt allegedly unlawful activity (cease) and to not take it up again later (desist). This notice/letter may also demand compensation to the extent of trademark violation committed.

Sending of a Cease and Desist letter is not usually legally binding, and is merely ancillary to any future legal actions that may be taken against the trademark infringer. The idea behind this is to amicably resolve the matter rather than going through a litigious process.

Though used in many different situations- such as in cases of defamation (libel and slander), breach of contract and debt collection; Cease and Desist letters are mostly used in connection with purported infringement of the bundle of IP rights, such as trademarks, copyrights and patents.

How to respond when you receive a Cease-and-Desist Letter

While it is verily possible to receive a C & D letter for intentional trademark infringement on the recipient’s part, there have been cases where people have received such unwarranted threats, as had happened in the case of Jake Freivald v. West Orange.

Numerous small business owners, bloggers and photographers receive such notices. So whether the alleged infringement has been unintentional, born out of an ignorance as regards the existence of similar well-known trademarks in the industry or a different industry, or plain unjustified (and is a merely used as a means of threat), it is important to follow these steps to adequately respond to such a notice.

Here are a few steps you can take to respond to a Cease and Desist letter: