Registration of other Languages as Trademark

The Doctrine of Foreign Equivalents deals with the analyzing of a trademark that consists of a foreign word. In such a situation, when an application of a foreign word is received, it is translated into the native language in order to check if the word can be registered/if there exists a similar mark. 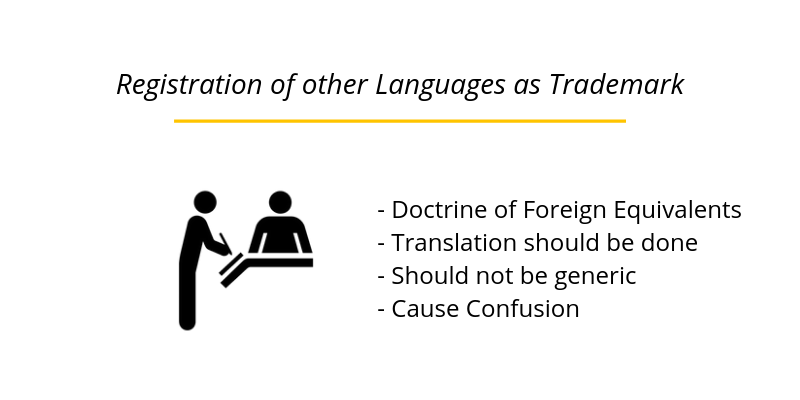 The standard test under this doctrine is to check if an average consumer who is familiar with the foreign language would translate it, consequently leading to confusion/deception.

Under Rule 33 of the Trademark Rules of 2002, it is a requirement that when applying for the registration of such a word, the endorsement of the translation of the word that is not Hindi or English, must state in the application, the name of the language to which the word belongs.

How to Register Trademark in other languages in India?

In India, there exists a number of regional languages, 780 to be precise. Thus, this can lead to a much higher probability of trademarks being registered in different languages.

When a word is translated, it is often found that the meaning of the word changes i.e. it becomes a generic/commonly used word or a descriptive word (i.e. marks that describe the characteristic of the good/service on which the mark exists).

In such a situation, especially on applying the doctrine, the registration would be declined. The doctrine has only recently been increasingly applied in India.

The doctrine finds its place under American Laws because of the number of immigrants and the different languages being spoken.

Under the UPSTO (United States Patent and Trademark Office) the trademark manual of examining procedure provides for the following tests for determining the applicability of the doctrine:

This doctrine was discussed in the case of Aktiebolaget Volvo of Sweden vs. Volvo Steels Ltd . of Gujarat (India) (MANU/MH/0076/1997) wherein the test for determining whether the purchasing public would be familiar with the language was highlighted.

The court observed that words are translated into other commonly used foreign languages such as French, Italian, Spanish etc. so as to test them for ‘descriptiveness’ and ‘generic' nature.

However, foreign words from ‘dead languages’ such as classical Greek would not be given this threshold or considered because the general public would ideally not be familiar with such a language in order to be confused.

In practicality, this doctrine is not used generally as a  hard and fast rule, but instead, it is used as a guideline on a case-by-case basis depending on the relevant facts and circumstances.