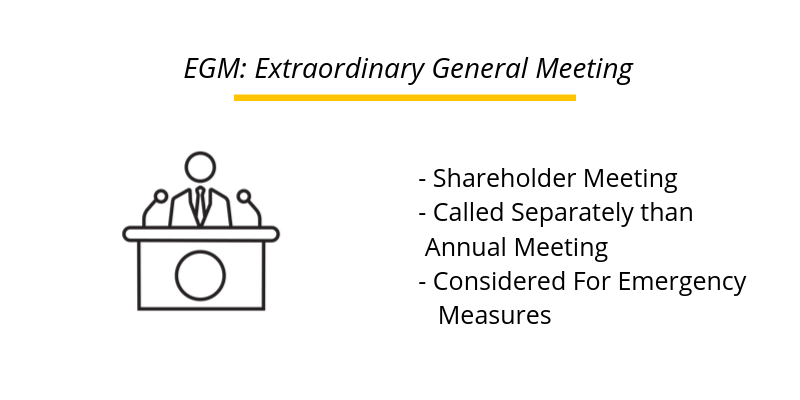 Shareholders of the company meet only when annual general meeting (AGM) is conducted based on a notice that is published and provided to the members involved. The AGM is conducted at a fixed time and place a with proper notice.

However; in certain cases, the urgent matters of the company require a meeting with shorter notice.

The matters that are taken up in the extraordinary general meeting are usually the one that arises in between the Annual General Meeting and should be necessarily resolved. The EGM is usually held for matters that are management issues and require immediate attention.

The EGM can be called for any of the following matters:

Note: Extraordinary General meeting is a board meeting that is carried on to see to the urgent matters only.

Notice of EGM shall be posted before 21 days of convening the EGM as per the companies act, 2013; Although shorter time period can be selected based on the conditions mentioned in section 171(2) of the companies act 2013.

The notice of the meeting must include:

EGM for any company can be held on any day except national holidays. The detailed procedure for holding extra general meeting will be mentioned in the AOA of the company

Who can call an EGM?

The common practice among companies while calling an EGM is for shareholders or members to call the meeting whereas company law prescribes that only certain members of the company can call for an EGM.

The list of members that have the authority to call the meeting are:

The board meeting can be called by the board on its own motion if approved by the majority of the voting board members.

Directors of the Company

An AGM can be called by the directors of the company and if at any time any director is not present in India, the director present and who is capable of acting and who can form a quorum shall be sufficient.

NCLT or the tribunal for companies also have the power to call Extraordinary General Meeting (EGM).

All the businesses that are carried on by the company in an EGM are considered special business. The extraordinary general meeting has a two-fold function: