What is Revocation of Patent?

A patent is an exclusive and monopoly right which is granted by the patent office to the inventor or the interested party who has filed a patent application. The patent right granted can be cancelled by filling a revocation petition in India to the appellate body or to the High Court. 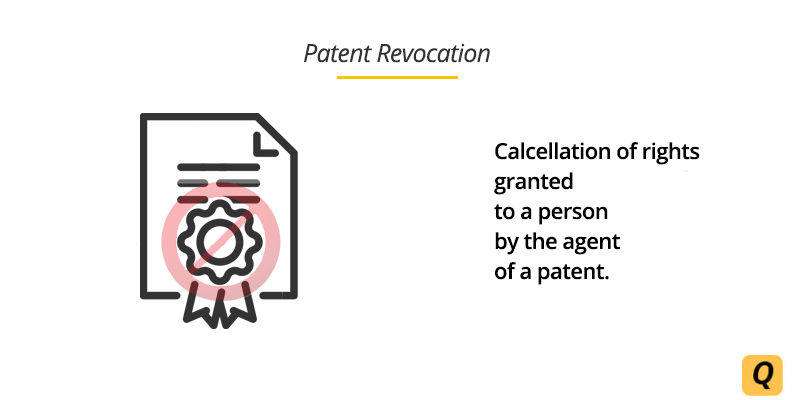 A grant of a patent is provided to the first and the true inventor for the creation of something new and novel for the benefit of the public. The general public is given a chance to challenge the invention on the ground that the invention is not novel and does not have an industrial or general use.

Revocation means cancellation or annulment of something by the respective authority. After revocation, the title and privilege of the person or institution are taken away from them.

Conditions for Revocation of Patents

The patent which is ambiguous or vague in its mode of application, and is not considered in the interest of the public is revoked by the Central Government. The notice of revocation is mentioned in the Official Gazette, along with the reasons for the same.

Grounds of Revocation of Patent Application

There are four basic grounds through which a patent application can be revoked:

The party interested or the central government can file an application on the following grounds for revocation:

Section 64 lays down grounds for revocation under the Indian Patents Act. However, the grounds mentioned in this section is not exhaustive.

Therefore, Section 65, 66 and 85 are also used for defining the grounds for revocation proceedings.

Proceedings for revocation of the patent can be initiated through three methods: By the central government, through infringement proceedings filed in the court, and through the Controller of the Patents and Trademark.

Central government directs the Controller to revoke the patent if the subject matter of the patent falls under Section 65 of the Indian Patents Act.

Revocation proceedings in high court can be initiated through counterclaims in an infringement suit.

Revocation provision under Section 64 of the patent law is not exhaustive. As mentioned earlier, Section 65, 66 and 85 are also used for defining the grounds for revocation proceedings. Additionally, Section 25(2) defines Pre-Grant Opposition.

Supreme Court in its recent judgment has laid down that the applicant who files post-grant opposition exhausts his opportunity to file revocation proceeding against the same patent.

Surrender of Patent and Revocation Proceedings

Surrender of the patent under the Indian Patents Act is only possible if the applicant has no infringement or revocation proceedings against the invention going on. The said ground has been laid down under Section 63 of Indian Patents Act.

A patent can be revoked by filing patent revocation application by any person interested or by the Central Government itself.

Keeping germs in the water is not enough to prevent the patent from being revoked in the case of Pureit Patent for Hindustan Unilever(HUL).

The Intellectual Property Appellate Board (IPAB) on June 2012 revoked the patent granted for the product Pureit. The application was forwarded by Tata chemicals Ltd. to the patent authorities. In totality, the patent for the product was cancelled on many grounds, but the main ground of rejection involved non-complying with Section 8 of the Patents Act.

The grounds of revocation are:

Patent granted for diabetic medicine derived from the extract of Jamun, Chundun, and Lavangpatti was granted by the Patent Office. The Revocation of the patent was on the ground that the patent application was against the public interest. The following proceeding quashed the right of exclusive use of medicine for drug maker Avesthagen.

The Govt. stated that the patent right granted was against the interest of the State, and was generally prejudicial to the public, and hence, was erroneously granted.

JC Bambford (JCB) Excavators Ltd., a UK based company dealt with earth moving equipment. The company's Indian patent was challenged by a Chinese manufacturer GuangXi Liugong Machinery. JCB had failed to disclose to the authorities under section 8 about the national filing in other countries, which is mandatory.

The Deputy Controller of Patent and Designs revoked the patent of the Company since they failed to disclose their Australian Patent filed in 2011. This falls under non-compliance under Section 8.