Advantages and Disadvantages of a Private Limited Company

A Private limited company is a type of a privately held small business entity. A Private Ltd business entity limits the owner's liability to their shares. It also limits the number of shareholders, and that restricts them from trading their shares publicly. Private companies are generally a preferred format of company registration for most of the entrepreneurial India. This is largely due to the ease of access provided by the private limited company. 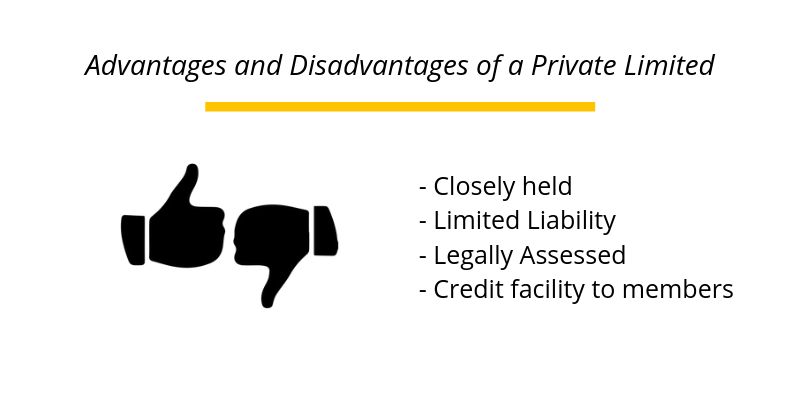 The major advantages and features of a private limited company can be summarized as below:

As all the stock of Private Company is concentrated in the hands of a few individuals, it mitigates the risk of intrusion of an unknown.

A Private limited company is an independently taxed and accountable business entity, where each shareholder has liability limited to his or her shareholding

As per the terms of the contract the private limited company enjoys the status of a legal entity and in this capacity it can own property and enter into legal contracts. Also, the members of a company are not liable for the company's debts to its creditors.

A company is a juristic person and its true owner.  As per the provisions of the Act, no member of a company can claim the properties owned by the company as its own as long as it is a going concern.  It is worth to note here that a no shareholder is a member of the company.

A private limited company hold high credibility in the national and international market.

In Private companies, the scope of expansion is easy as the fundraising can easily be done by receiving funds from its members, directors only. The bank also gives high value to private companies and sanction Loans accordingly.

Furthermore, the Private Limited Company has some features also:-

A Private Limited Company received funds from its directors.  As per the provision of the Companies Act, 2013 and subsequent amendments the company can issue Loan to Directors. Earlier the company was refrained to do such transaction.

As per the Companies Act 2013, a private company can issue ESOPs to their employees in view of motivating them to work harder. Only a company of Private Limited in nature can issue such stock; no LLPs are bound to do any such.

The government has provided certain exemptions to the startups type of companies and which are very popular among foreign investors. The exemptions declared by the government to startups in its recent budget include a three-year tax exemption, exemption from capital gain tax, 80% reduction in the patent registration fee, Intellectual Property Rights protection, funding support and credit guarantee fund eligibility.

The disadvantage of Private Limited Company

The major disadvantages of a private limited company can be summarised as below:-

The major disadvantage of a private company is the requirement of two directors. However, One Person Company can be formulated and have the features of the private limited company, the requirement of resident Indian citizen kept it away from foreign investors.

Though it is easy for a shareholder to exit from a company, the procedures to wind up a private limited company is complicated and involves cost.

It is highly advised to get an expert assistance for Private Limited Company registration.